Let's be honest with ourselves here. Rowing is basically an illness. Energy levels, exhaustion, sanity and food bills are pushed to their maximum. A slight bit of insanity is not only tolerated but encouraged.

In the transition from "being on a break from rowing" (breaks being crap things that coaches make you do at the end of the season) , so from nearly being a normal person, to "rowing again" I noticed the following things which I think are classic symptoms of rowing illness:

1) An unofficial exclusion zone springs up around your laundry basket INTO WHICH NO HUMAN DARE TREAD. It has its own EU certified warning triangle above it. For this reason kit is generally thrown from a distance in its general direction. You can only bear to go near it to wash it when you're faced with the choice of either wearing that really horrible Godfrey one piece that has never fit properly or "recycle" an 18K lycra that is still just that little bit damp *shudder*. Double rations of washing powder are always used.

2) You listen to Pendulum for at least a couple of hours a day. (I found myself listening to Enya as in ENYA while not rowing this summer. Goddam ENYA. As in the Irish New Age-y one. This would never happen nowadays.)

3) Porridge and maltloaf become food groups in their own right. (Aside: is this not the best piece of kit EVER IN THE HISTORY OF THE WORLD? A complete win of a 21st birthday present that one).
4) You instantly classify any music you hear into "great erg tunage" or "meh not great erg music". (c.f. #2)

5) You eat  meals straight from the saucepan, not out of trying to save on washing up, but because no bowl is big enough. (Actually, not strictly true. I own a fruit bowl now.)

6) You think that picking blisters is a socially acceptable activity. Especially in lectures. You also grade your calluses on how "good" they are getting. (I saw a great t-shirt for sale once which had a silhouette of some guys carrying an VIII and the caption "Real Men Have Callused Hands" on it. I regret not buying it as I can't find it anywhere anymore :-( Though I do expect wearing this would be a great man-repellent, which I could do without. Hmmm.)

7) Walking down stairs is really hard. You develop coping techniques such as using the bannister to do multiple stairs at once, or just half-falling every time. (Though one of my friends suggested to me yesterday of walking down backwards, which sounds sensible). I was working in a house this summer (as a bedder - woo yay) which had 5 floors. It was during that week that I developed a deep, deep irreversible hatred of Henry hoovers. Having to haul that smug little git with its stupid face and stupid hose ALWAYS IN THE WAY AND TRIPPING YOU UP around a house with many many tiny narrow windy staircases has left me a little bit scarred.

8) The only mental arithmetic you can do is calculating splits. Get me to add up a list of numbers or do a subtraction or something.... not a chance (and I'm a goddam mathmo!), but what split is an x.xx 2K? Sorted.

9) You have those mornings where you wake up and it's dark and you are so incredibly tired that you cannot think straight but you know you have to GO ROWING so you blunder round and round your room at some ungodly hour trying to find pieces of kit YOU KNOW you left neatly somewhere but some complete bastard has obviously moved and COFFEE you need COFFEE so you go and make coffee wearing a onepiece, sports bra and a single sock and OH MY GOD IS THAT THE TIME HOW IS THAT THE TIME must get the train COFFEE COFFEE DRINK THE COFFEE train kit train train WAIT WHERE ARE MY OAKLEYS OAKLEYS WHERE ARE YOOOOUUUU I don't care if it's still dark I want my sunglasses where are they shit shit train train run for the bastarding train.

And somehow you always get to training on time. I am pretty certain I am not the only one who has mornings like this.

In fact, I'm pretty sure number 10 *defines* you as a rower. You will never, ever be able to see a nice bit of sheltered river or lake and not think how great rowing on it would be as long as you live. I promise.

Getting to Ely and seeing that? Ooooohhhh yes. Day made.

P.S. EDIT Links fixed in first post and photos reattached in the second - teething problems! There's also a fourth post (which kinda duplicates with the "Cereal" one in places - a case of crossed wires, sorry) here.
Posted by Anna at 22:51 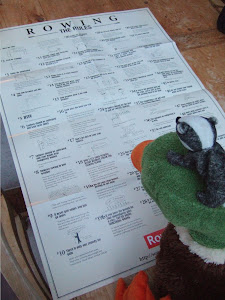